You’ve come up with an amazing idea for a novel, so what’s next? Part 3

You’ve written your outline and/or plotted your novel. You’ve named your characters and given them a background, and are itching to put pen to paper, but what about the setting for your novel?

Many seasoned novelists will tell new authors to write about what they know, and its good advice. But most people see reading as a form of escapism from the humdrum of everyday life.

Just as life experiences often given us ideas for novels, places we travel to can often be the source of inspiration when it comes to settings. For example, when I set out to write my first novel, Three Weeks Last Spring, I had recently returned from a holiday in Seattle, Washington. Puget Sound and the San Juan Islands are spectacular. I realised that it wouldn’t take much to upset the ecological balance of the area. An oil spill from a tanker and the wildlife, in particular, the seabirds and mammals, would be facing a catastrophe, equal only to the Exxon Valdez oil spill in Prince William Sound in Alaska. That vacation, not only gave me the setting for my novel, but also the idea for the story.

I knew I wanted to set my second novel in Scotland, but I needed an idea for a story, and a setting. Having lived there for twenty years I had travelled the length and breadth of the country, but I also had firsthand knowledge of the offshore oil industry. I recalled a visit to the west coast, and the drive along the single-track road to Loch Hourn, a fjord-like sea loch, and decided it would be a wonderful setting for a novel. But what to write about? 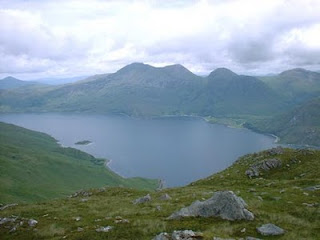 A little further south lays Loch Kishorn, another sea loch, and the site of the now defunct Howard Doris Construction yard. I tried to imagine how the occupants of the three small settlements on the shore, known collectively as Kishorn, must have felt when the Highland Council granted permission for Howard Doris to use the loch as a construction facility for offshore oil platforms.

From that setting, and my knowledge of the offshore industry, the idea for The House on the Shore, evolved.

So you see setting can be used as a plot devise. An isolated Scottish Glen, a bankrupt factitious Laird, desperate to salvage his family fortunes, and an offshore construction company seeking to build a deepwater facility, became the ingredients for a romantic suspense novel. But it’s a novel based on fact.

As a writer you should always be aware of your surroundings – you never know your next vacation or trip to the countryside could be the setting for a novel.
Posted by Author Victoria Howard at 15:52