I am delighted to welcome Angela Wren to my blog today.  Not only is Angela an actor and director, she is also the author of short stories and comic-flash fiction.  She very kindly agreed to take time out of her busy schedule to tell me a little about the background to her first novel, Messandrierre, which has just been released. 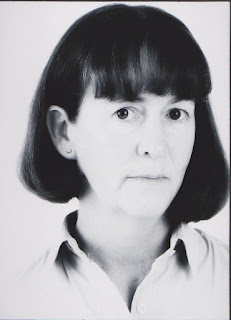 First of all, thank you Victoria for allowing me the opportunity to write on your blog.  I hope your readers will find my little nuggets of wisdom - assuming there are some - interesting and useful.

I'll introduce myself as something of a scribbler and I've been doing that since I was about 8 or 9.  I even liked my creative writing homework.  And it's OK; you don't need to tell me how peculiar it is for a child to actually like homework, any homework!

I was first introduced to France as a teenager and, frankly, I've been hooked ever since.  My scribblings then centred on what I'd seen, where I'd been, the people I'd met.  Not that any of it came together as a story at that time.  How could it with the standard teenager's attention span!

Then grown-up life and work got in the way and I spent less time in France and more time in front of a computer writing planning and strategy documents as my life spiralled through a career in business change and project management.

My light bulb moment was my decision to escape the rat race.  I started visiting areas of France I'd never had the time to go to before; I stayed in places I'd just driven through in the past and I wrote more seriously.  But when you have scenery like this - 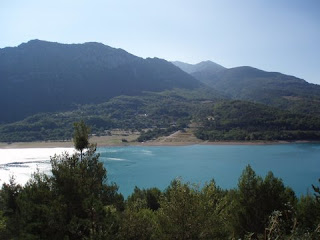 to look at for as long as you want, it is hard not to be inspired.

I visited the Cévennes and took my Stevenson with me and, over three weeks, I followed his route from Le Monastier to Allais along with my version of Modestine - a Landrover!  That journey took me across some stunning countryside, tiny villages where everything stopped for lunch and the family, through vast groves of walnut trees and along winding mountain passes. 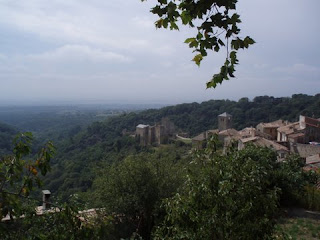 To this day I am certain that I stood on one hillside, looking down on a small farm and a few other houses, in exactly the same spot that Stevenson must have been to create a sketch I have in another book of his.

In a village in Burgundy, I happened across a two roomed museum dedicated to Renoir.  His studio was in an outbuilding and for a couple of euros I went to have a look.  Expecting only to be allowed to look through the windows, I was stunned to find that I could actually go inside.  So I have had the inestimable pleasure of treading in Renoir's footsteps!  And, it seems to me that there are lots of little places like this the length and breadth of the country - you just need to search them out.

Need I mention the cuisine?  Probably not, but I wonder who else has driven across the Puy de Dome and found a large farmhouse with French cars parked outside and a hand-written menu drawing-pinned to the door frame.  I walked in to discover a large room filled with trestle tables and benches and Madame made the people at the nearest table squeeze up to fit me in.  The food was simple, the taste phenomenal and the ambiance buzzing.

So, setting my first novel, Messandrierre, in France, seemed to me at least, to be a logical progression from those early scribblings.  My book is the first in a series of murder mysteries and features my investigator Jacques Forêt.  Messandrierre is the name of my fictional village in the Cévennes and the story begins in September 2007 because when I was there at the time, it snowed! 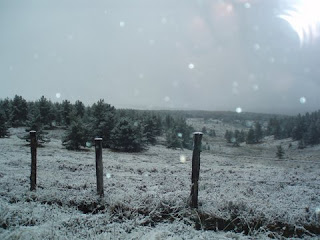 Having followed a career in Project and Business Change Management, I now work as an Actor and Director at a local theatre. I’ve been writing, in a serious way, for about 5 years. My work in project management has always involved drafting, so writing, in its various forms, has been a significant feature throughout my adult life.

I particularly enjoy the challenge of plotting and planning different genres of work. My short stories vary between contemporary romance, memoir, mystery and historical. I also write comic flash-fiction and have drafted two one-act plays that have been recorded for local radio. The majority of my stories are set in France where I like to spend as much time as possible each year.

You can learn more about Angela by visiting her website and blog; 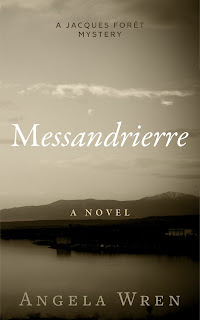 Sacrificing his job in investigation following an incident in Paris, Jacques Forêt has only a matter of weeks to solve a series of mysterious disappearances as a Gendarme in the rural French village of Messandrierre.

But, as the number of missing persons rises, his difficult and hectoring boss puts obstacles in his way. Steely and determined, Jacques won't give up and, when a new Investigating Magistrate is appointed, he becomes the go-to local policeman for all the work on the case.

Will he find the perpetrators before his lover, Beth, becomes a victim?
Messandrierre – the first in a new crime series featuring investigator, Jacques Forêt.

Posted by Author Victoria Howard at 11:23