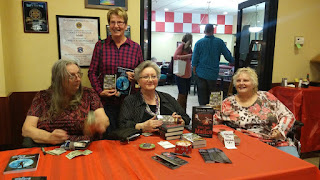 Brenda Hill, author of With Full Malice, about a deadly vigilante society in Yucaipa, organized the event and offered her hardback and mass-market paperback at a large discount. 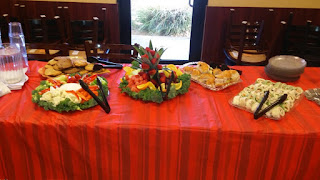 Local authors as well as those from The California Writers Club talked to the public and answered questions about writing and workshops, including:

Brenda Hill: With Full Malice: about a deadly vigilante society in the Inland Empire.
Samuel Thomas Nichols: The Seventh Stage - about the aftermath of the murder of a rancher's wife and daughter.
Joyce Melton: Blue Moon – on the third Thursday of each month, the Devil grants wishes and causes havoc.
Barbara Reed: Harmonic Deception: Does a tragic childhood excuse murder?
Sue Andrews: To Live and Love Again – about how the author survived several murder attempts near-death experiences.
David Strack: Letters Over the Wall – about the lives of four East Germans behind the Iron Curtain.
Debby Johnson: Rock. Paper. Scissors -  about a new kid in school who’s rejected by the other kids.
Cathie Norton: The Tale of the Trees – A young woman’s journey through grief to resolution. 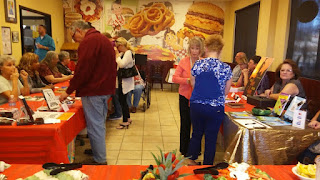 For questions about future events and/or writing workshops, go to brendahill.com

Posted by Author Victoria Howard at 13:51