I am delighted to welcome fellow author, Lizzie Lamb, as my featured author today. Lizzie writes contemporary romance and is a member of the New Romantics and the Romantic Novelists' Association. 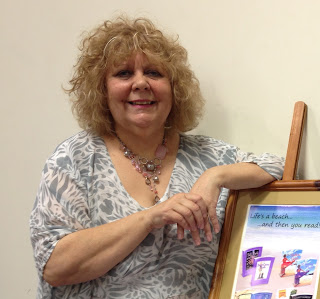 Welcome Lizzie.  Tell us about your latest book, Scotch on the Rocks, and how your parrot, Jasper made it into your novel. 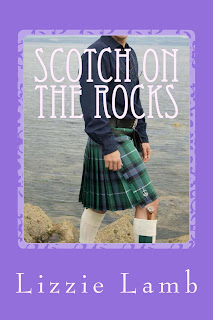 In my novel Scotch on the Rocks, the heroine’s aunt - an old-school peacenik, owns a blue and gold macaw called Pershing. In one scene, the hero Brodie, an American, asks Ishabel (the heroine) how her aunt came to own the parrot. Here’s how she explains the parrot’s presence to a less than impressed Brodie (the parrot had just bitten him on the toe).

‘A parrot with left-wing sentiments. I wonder how he came by those!’
‘He flew into my aunt’s tent one cold, dark October night in the mid-eighties. She was camped outside the perimeter fence at Greenham Common Airbase with other women, protesting against the deployment of cruise missiles by the USAF on British soil.’
‘Polaris. Greenham Common. Just what does your aunt have against America?’ he asked.
Issy ignored his outburst. ‘Pershing was just a baby then and still had a soft beak.’
‘Unlike now, you mean?’ Brodie asked testily, looking down at the blood-smeared floor tiles.
Issy bent down, kissed Pershing’s horny bill and continued with the story. ‘Esme placed adverts in the post office but no one came to claim him.’
‘Guess they were glad to get rid of him,’ Brodie said, unfeelingly.
‘Gei’us a wee kiss, dahrr –lin’,’ the parrot responded in a broad Scots accent. ‘Ah, nice kiss . . . no bite - Pershing.’ It gave Issy a smacking kiss and even Brodie couldn’t help but laugh.
‘Pershing?’ Brodie questioned. ‘Go on, enlighten me.’
‘After the missiles the USAF deployed at Greenham Common. Isn’t that right, mah wee peacenik?’
‘Aye, see you Jimmy,’ the parrot replied, starting to struggle free.

In the following scene the parrot unwittingly gives away Brodie’s real identity, leaving Ishabel wondering if she should trust her instincts and lower her guard with Brodie, or keep him at arm’s length. In another scene, Ishabel and her aunt have been visited by the Sunday Morning Mafia, local ladies on their way to worship at the wee kirk at the end of the village. In reality, they’ve come to snoop, the parrot picks up the vibe and sends them on their way . . .

‘Feck off,’ Pershing called out, loud and clear. ‘Gei’us a drap o’ the swally, doll,’ he added for good measure, eyeing the bottle of whisky on the table. Their shocked expressions said it all – the bird was the spawn of Satan, old age and a palpatooral hadn’t robbed Esme Stuart of her prickly manner; and her niece had clearly surrendered herself to the tall American. They’d pray for them; pray for them all in the kirk this morning. And give thanks to God for their simple lives . . . then they’d return next week to pay another visit.

I hope that’s given you a flavour of the novel and made you want to read more. Where does my fascination with parrots stem from? Simple. My great-uncle Tommy had two large macaws who spoke with Scottish accents (he was Scottish, you see) and they kept me amused for hours when I was a child. I was never afraid of their hooked beaks and scaly pterodactyl claws, I was too busy watching how they interacted with humans, liking some people and hating others. So it was natural for me to include a parrot in Scotch on the Rocks, and to model it on my parrot, a Hahn’s Macaw called Jasper. 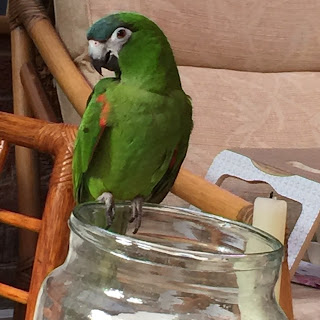 I brought Jasper home for a trial period over the spring bank holiday weekend in 1996, just to see how we got along. He bonded with my husband straight away and I was given the role of parrot-slave.

Jasper’s first words were; ‘hello’, ‘want some’, ‘Daddy’ and ‘nightie-night.’ He then picked up words we never set out to teach him – ‘want a chocolate biscuit’, ‘don’t be silly’, ‘in a flippin’ minute’, and ‘you pooper dooper’. One morning, as I was leaving for school I called out ‘bye-bye’ to him, he responded with ‘see you lay’, which was his way of saying ‘see you later, alligator.’ Every morning he greets us with: ‘Come on, breakfast ready’, and ‘wannacup o’coffee?’ He can ask for a bath (which he does every Sunday – don’t ask me how he knows its Sunday); sing, sneeze, cough - and he laughs, exactly like I do. His favourite expression is: “Where’s that Daddy gone?” 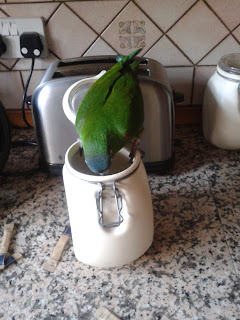 When I’m writing in my study I leave him to play in the kitchen cupboards, pushing tins round with his beak and making his ‘house’. When he’s bored he calls out – “Come on, Mummy, Jaspie ready.” That’s my cue to take a break from the computer and do something else. There are many stories I could tell you about Jasper, but I’ll finish with the caveat at the end of Scotch on the Rocks: 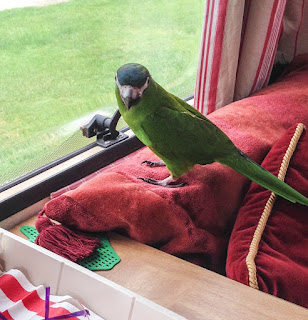 “Finally – a word about parrots. We have had our Hahn’s Macaw Jasper for nineteen years and he can do and say all the things Pershing does – and more. He is funny, entertaining, good company, more demanding than La Bella Scozzese, and a lot of hard work – but we wouldn’t be without him. If you read Scotch on the Rocks and decide you would like a parrot, think about it very carefully. Your parrot will be with you for a long time and could well outlive you. Read what the internet has to say on the subject; these gorgeous, voluble creatures need you more than you need them. If you do decide to have a parrot, buy a hand-reared one from a reputable dealer, then you and your parrot will be friends for life.”

I have many Pinterest Boards but my two favourites are Parrots and Outlander. Tells you everything you need to know about me!

Scotch on the Rocks - where men are men and women are glad of it
Hocus Pocus '14 - a collection of spooky short stories
Boot Camp Bride - Romance and Intrigue on the Norfolk marshes
Tall, Dark and Kilted - A contemporary romance set in the highlands of Scotland
website: www.lizzielamb.co.uk

Thank you for joining us today, Lizzie.  We wish you well with your new book.
Posted by Author Victoria Howard at 09:00