WRITING LOVE SCENES - HOW FAR CAN YOU GO?

I am delighted to welcome Aaron Paul Lazar.  Aaron is the award winning author of the GUS LEGARDE,  SAM MOORE and TALL PINES MYSTERIES, in addition to three WRITE LIKE THE WIND writing guides.  Aaron has just released his first romantic suspense novel, THE SEACREST, which is available from Amazon 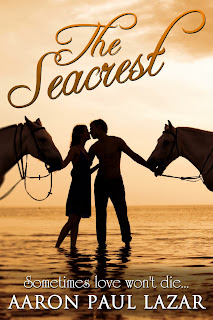 When I first started writing the LeGarde Mystery series in 2001, my daughters were teenagers. I was very careful to imply desire, to hint at bedroom scenes, and to be sure all references to intimate sexual relations were confined to a healthy marriage.

After all, I couldn’t let them think that Dad “thought” like that, or that I blithely wrote about all the things about which I constantly warned them.

Raising girls in late nineties and early in the millennium was not easy. Social pressures abounded. From what I heard, most of my daughters’ classmates lost their virginity in middle school, and if you were one of the few who didn’t have a boyfriend, you were an outcast, a reject who wasn’t worthy of friendship.

It drove me absolutely nuts.

So I was very careful not to write about things I preached against, and thus my first and even second mystery series were quite wholesome. (LeGarde Mysteries and Moore Mysteries) Not that Gus and Camille had more than a Victorian relationship until they were married. Sure, Gus longed for Camille in a very real and normal fashion. But he respected her past – a sad life with her abusive ex-husband – and he also had trouble ridding himself of his long time allegiance to his wife Elsbeth, who’d passed before the first book was written.

By the time I was working on my third LeGarde book, my star-crossed couple was finally united in marriage, and I wanted to write their honeymoon consummation scene. It was important for me to show Gus’s tenderness and his gentle treatment of his bride. And after all, my fans had been waiting a while for this moment. I had more than a few letters from readers (mostly men), asking when the heck Gus was gonna get the girl, so to speak.

Something funny happened around the time I wrote Mazurka. I realized that my girls were not reading my work, (not much, anyway) nor were they in the least excited about Dad’s writing career, awards, or publishing credits.

No, their lives consisted only of real relationships, school plays, and boys, boys, boys.

How do you think I got this sprinkling of silver on my temples?

As difficult as it was in this phase of their development, it did free me up to write a bit more spontaneously. So I penned the scenes with tasteful romance, including only a few references (again implied) about the actual acts involved.

With a feeling of relief, I just relaxed and where it seemed appropriate, included some new scenes for my readers, including a shower scene after Gus and Camille were almost killed in the underground Parisian Catacombs. It was an affirmation-of-life type of scene, and gave me the freedom to experiment with some scenes.

“The soap and water streamed down her skin, intimate in its contact, curving along her hips and down her thighs to her feet. As we lathered each other, a mad desire to celebrate life consumed me. My lips touched hers. She hesitated for a moment, looked up at me through long, wet lashes, and then kissed me back.
It was different from the first time, almost frantic now. There was no shame in her eyes, no glimmering ghosts of our past. Although some of my injuries ached when we pressed together against the shower wall, the warm, moist coupling washed away the blood and pain.
When it was over, we embraced beneath the spray. Without warning, I choked up. She began to shake and looked at me. I recognized the hot burst of emotion that seared and welled in her eyes.
I fluttered sweet kisses over her mouth so she wouldn’t cry. She circled my waist with her arms, and kissed me back urgently. Dark hair streamed down her back as the water flowed through her sodden curls. She lay her wet face against my shoulder and held me tight.”

The above scene is pretty darned tame, isn’t it? But for me, it was a big step! It felt good to release some of the scenes I’d always wanted to write, and I continued in that vein for a few years.

By the time I’d written seven more LeGarde Mysteries and three Moore Mysteries (featuring the green marble, a talisman between Sam Moore and his long-dead little brother Billy), I realized no matter how many free copies I’d give my daughters, they just weren’t interested in reading that much. Now they’re all adults with husbands and kids and it was time for me to let loose with whatever I wanted to write. And if they somehow, some day discovered that Dad had thoughts like a real man, well, so be it. LOL. All of these books were written from a guy’s point of view. That’s when things changed!

I began a new series, Tall Pines Mystery series (For the Birds, Essentially Yours, Sanctuary, Murder on the Sacandaga), writing from inside the head of Marcella Hollister, wife to Quinn and former lover to Sky Lissonneau.

Before, writing from a guy’s point of view was easy, really, because both Gus LeGarde and Sam Moore share many qualities with me. Sure, they have their own personalities and possess unique strengths and weaknesses, but I didn’t have to stretch to imagine Gus’s passion for Camille, or Sam Moore’s sensual memories about his wife in the early years before she got MS. It was easy to picture these charming women characters. Longing for them came naturally, and I pretty much used the feelings I’ve had all my life for my wife, Dale, who happens to have resembled these ladies at various points in her life.

But when I decided to challenge myself and start my new Tall Pines series from a woman’s point of view, I hadn’t thought about the sexual aspect of the job. No, I hadn’t thought how it would sound when I read the book aloud to audiences (like I do today), telling them to picture me female, five-nine, with dark hair to my shoulders and talking through my protagonist’s voice about how luscious her man looked in his open-fronted shirt.

Here’s what I mean. This section is from Essentially Yours, book 2 in the Tall Pines series:

“Unbidden, scenes from our youth tapped at the edge of my mind’s vision. I felt the warm breeze blowing across my bare back while we lay in Sky’s family’s pontoon boat in the middle of Honeoye Lake at midnight. His feathered touch traced my spine; his fingers trailed around my hips and lower. I pictured the blond curly hair on his strong, young chest; the hard body that lay beneath the soft fuzz.
Damn. He’d been amazing. And he’d really cared about how I felt, if I’d been satisfied. I figured I’d been lucky. Most teenage boys rushed to conquer their hill, uncaring of the pain or condition of their lovers’ bodies. And most girls just took it, thinking it was part of the “first time,” anticipated hell.
Yet, Sky had read extensively before he approached me, looking up oriental techniques I’d never heard of. He’d known about special places that make a woman moan in pleasure. Made me moan in pleasure. Focused and careful, he’d done embarrassing things that made me crazy, disappearing beneath the blanket for long spells of time. He’d worked on me until moisture coated all of my tender parts. And he’d waited until I was so ready I didn’t think I could wait another second.”

When I read sections like the one above to audiences, it was a bit uncomfortable at first. But once I let myself become caught up in the story, it worked out just fine and my fans didn’t seem to doubt my masculine tendencies (grin).

Marcella Hollister is a fun character to write. She’s healthy, for the most part, but haunted by her infertility. I needed to get inside the head of a woman who yearned for children, but would never have one of her own. This wasn’t familiar territory to me, so I had to imagine the feelings, probably basing most of my perceptions on my wife’s Lifetime movies and Joan Hall Hovey suspense novels.

Marcella doesn’t hide her unabashed affection and attraction to her half-Seneca Indian husband. She pictures him in full Indian attire, atop a big pinto horse, gazing over the horizon with his arms outstretched to the Great Spirit.

She’s someone who physical needs are quite foreign to me. But I’m proud to say that after living with my wife, mother-in-law, three daughters, and watching a million chick flicks with them over the years, I’ve had some of my fans tell me I’ve nailed the woman’s point of view.

Sky reappears after being MIA for 18 years, and Marcella goes through some deep and difficult emotional challenges when he drops back into her life.
Okay, so those books went over well and I wasn’t ostracized from society about getting bolder in my writing. Now comes my twenty-first book, The Seacrest, a beautiful love story. I knew I was going to “go farther” in this book (or is it “further?” I never could figure that one out!). I knew I wanted to write actual sex scenes, but to keep them romantic and tasteful, not let them get gross or crass. So far, my Beta readers have said I managed to meet my goal. But let’s see what you think? The following is one of the less explicit scenes from The Seacrest:

“It began a little at a time. A tightening of her muscles. Her back arched slightly. Her toes curled and uncurled, her legs stretched. Her moans became louder, more frequent. She’d direct me to a certain spot, tell me to go faster or slower, higher or lower.
And then she reached for me with urgency. She wrapped her long fingers around me and guided me, pressing my lower back with her free hand. “It’s time, Finn. Now.”
She positioned me into her moist folds, where shiny, smooth skin pulsed, as if waiting to swallow me whole. And then I lost complete track of the night, caught in the rhythmic wonder of our dance atop the sandy beach, beneath the moonlight that glistened silver on her eyes and lips. She’d timed it right, this very momentous occasion, and I reeled with pride when she peaked before me, clutching me and screaming, her body clenching and clamping with every wave of her pleasure. When she was done, I let myself go, nearly blinded by ecstasy. I reveled in the smooth, tight gripping, the pulsing tingles, the waves of climax that took me out of myself and shot me to Heaven and back.”

In my humble opinion, there’s room for a little romance in almost every genre. Mystery, thrillers, and suspense can all be spiced up a bit without dropping suspense or departing from the main story. And if you happen to write a romance story like The Seacrest, you’d best be prepared to include many love scenes!

For more information about Aaron and his novels, please visit his website  at www.lazarbooks.com or connect with him on the following sites:

Posted by Author Victoria Howard at 16:14