Coincidence? I think not.

As someone, who for twenty years, was involved in the offshore industry, I know what it’s like to have your heart skip a beat when the evening news reports an accident on an oil rig. My heart goes out to the families of the eleven men killed on the Deepwater Horizon.

Drilling and transporting oil comes at a high price, and there are times in our lives when we become too complacent.

We repeatedly ignored warnings by environmentalists, the Coast Guard, and other agencies that using single hulled, single-engine tankers to transport oil was asking for trouble.

The Torrey Canyon, a super tanker carrying a cargo of 120,000 tonnes of crude oil struck Pollard’s Rock between Land’s End and the Scilly Isles in the UK. Oil spread on the sea between England and France, killing most of the marine life along the south coast of Britain and the Normandy shores of France, blighting the region for many years thereafter.

Did we learn the lesson? Sadly, no.
Twenty-two years later, on the March 24, 1989, Exxon Valdez hit the Bligh Reef in Prince William Sound, Alaska. We were horrified at the images of dead seabirds, otters, and marine mammals covering the front page of nearly every newspaper in the world. These same images were beamed nightly into our living rooms. 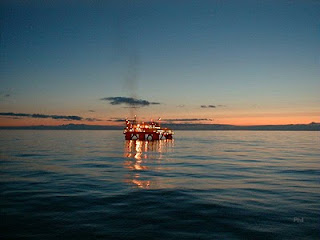 For many years, the offshore oil and gas industry was convinced that it had adequate safety measures to ensure that oil and gas rigs and platforms operated with little or no risk to personnel. But on the night of the 6th July 1988, Piper Alpha, a production platform in the North Sea, exploded into a fireball, killing 167 men. To date, it remains the world’s worst offshore oil disaster in terms both of lives lost and impact to industry.

After a protracted investigation, all three disasters were attributed to human error.

I had hoped the world would never experience another disaster on the scale of the Exxon Valdez and Piper Alpha, but sadly that was not to be the case.
This week, another oil rig, the Deepwater Horizon, sank in the Gulf of Mexico, with the loss of eleven men. Unlike Piper Alpha, the thousands of gallons of oil pouring out of a fractured pipe is already devastating the marine environment and fragile barrier islands and marsh of the Louisiana coast. It will take months, if not years to recover.

It is therefore somewhat eerie that my short story, ‘Man’s Complacency,’ should be released at this time.

Written nearly two years ago, ‘Man’s Complacency’ deals with an oil spill in Washington State’s Puget Sound, and features Joe McCabe, an important character from my novel, Three Weeks Last Spring. Joe is the head of the Washington State Department of Fish and Wildlife, which is partly responsible for the cleanup.

I think it’s it about time we became less complacent and developed systems and procedures that not only protect the men and women working on rigs and production platforms, but the wildlife that makes our planet so unique.
Posted by Author Victoria Howard at 10:51